In my [Dr Steven Gration] opinion the only way the Sunland proposal for twin high-rise residential and hotel towers including landfill of 5000 sq. metres of public waterways to accommodate the towers (in a 3-storey zoned area) can/would be approved, is if there are/were 4 Levels of Corrupt Government instrumentalities, all in action at the same time.

4 Levels of Corrupt Government instrumentalities,
all in action at the same time.

The GCCC Planning Officers who assessed the Sunland Development Application (DA) displayed honesty, due diligence and an understanding of the rule of law in framing their recommendations not to approve the Sunland proposal based on 14 clearly articulated planning law criteria.

On the other hand, the GCCC Planning Committee (Councillors appointed by Mayor Tate) have shown their susceptibility to coercion when they did not immediately accept the GCCC Planners' recommendations but rather, accepted that Cllrs Tate and Cllr Caldwell's personal tastes in "architecture" (and campaign donation and funding?) and private business interests should override the rule of law, that is, the City Plan 2015 and the Sustainable Planning Act 2009.
In my opinion, GC Councillors, at a time when they are under the heaviest of scrutiny by ECQ and CCC, appeared to have succumbed to coercion by Cllr Caldwell and his 'why you should vote for Sunland approval' document distributed to them before the Sunland vote, is full of mischievous, inaccurate statements masquerading as the truth and asks Councillors to ignore the rule of law. And moreover, Councillors who have openly accepted donations from Sunland indicated they will stay in the chambers to vote because they suggest, “I may have a perceived conflict of interest but in 'the public's interests' I will not abstain from voting”. Surely, they should be made to publicly explain how they believe accepting Sunland donations and not removing themselves from Chambers during the vote on Sunland’s DA is 'in the public’s interest'.

The previous LNP Seeney/Newman Government have put the GC Community in this position by changing (in the dead of night) the fixed lease arrangements for the Mariners Cove site to allow 'Residential' on previously 'non-residential crown-land' and 'landfill' of an area greater than 5000 sq metres of public waterways in the Broadwater. Even the local LNP Member for Surfers Paradise, John-Paul Langbroek, claims he was unaware of Seeney's midnight changes to Sunland's fixed-lease on Mariners Cove in his electorate by Seeney's Dpt of DNR, even though Langbroek was a Senior Minister and LNP Cabinet member in the LNP Government at the time.
So ring and email your Division Councillor and be polite and firm in letting them know we are scrutinising their behaviour, statements and votes. Any behaviour that is less than totally transparent, honest, ethical and adhering to the rule of law should be reported to the current Labor State Government authorities (including the Minister for Local Government) and the Crime and Corruption Commission (CCC).
Previous statements from the Seeney/Newman LNP Government regarding other Spit-Broadwater development proposals such as ASF China’s 'Integrated Resort’ aka casino and private high-rise residential plans for the takeover of 100 hectares of public parks, islands and waterways, cannot be trusted.

For example, Member for Surfers Paradise, John-Paul Langbroek, stated clearly to the SOSA President at the 2014 MBPA AGM, "Steven, the ASF proposal is not going to happen". And again at a meeting in his electoral office with cruise industry expert, Professor Ross Klein, in August 2016, MP Langbroek stated, "Jeff Seeney was never really interested in the ASF proposal, he preferred the Tony Fung Aquis proposal."

And yet, in a Brisbane paper on 15 October 2015, current QLD LNP Opposition leader, Tim Nicholls revealed that, "The Newman Government was just weeks away from approving ASF's...Wavebreak Island development when it lost power...Appropriate planning and environmental approvals would have followed..."

'Approvals would have followed' even though no independent navigational safety report had been conducted to ensure Seeney's promise that 'any gaming licence granted would be conditional on the prior establishment and ongoing operation of a successful cruise ship terminal.' (Hansard 14th Feb 2014)
'Approvals would have followed' despite the LNP appointed 'independent' probity investigator from PWC (who was co-incidentally a member of the Qld LNP Executive at the time) failed to find that ASF China Consortium's major partner was debarred by the World Bank for 8 years (2009-2017) for 'bribery, fraud, corruption' and 'tender price fixing' on Philippines National Road projects, and that ASF's casino management partner was embroiled in two international court cases for alleged failure to honour casino management contractual obligations. 'Approvals would have followed' despite no Terms of Reference for an Environmental Impact Study ever being produced or put out for public comment and amendment.
Nicholls' statements belie everything MP Langbroek has claimed in his meetings with community leaders.

While corruption at the fourth level of government, Federal level, at first seems unlikely in relation to the Sunland, ASF China and other proposals for the Broadwater-Spit, in our opinion, it has been revealed that this might be where the highest levels may exist.
It has been revealed that Mayor Tate's GCCC election campaign manager (and that of several other sitting and newly elected Councillors) developer lobbyist Simone Holzapfel, made 10 donations of over $10,000 of her 'own money' to the LNP 'slush' fund of Gold Coast Federal MP for Fadden, Stuart Robert. In turn, at least $30,000 from Robert's Fadden Fund found its way into the campaign funds of at least two 'independent' candidates in the GCCC 2016 elections, who also happened to be staff members at Robert's GC electoral office. The one candidate who was elected has not declared potential or real conflicts of interest when voting on Sunland, ASF or Cruise Terminal feasibility studies in Council. Amongst Holzapfel's clients are Sunland and ASF China.

A recent article A Murky Week in Gold Coast Politics 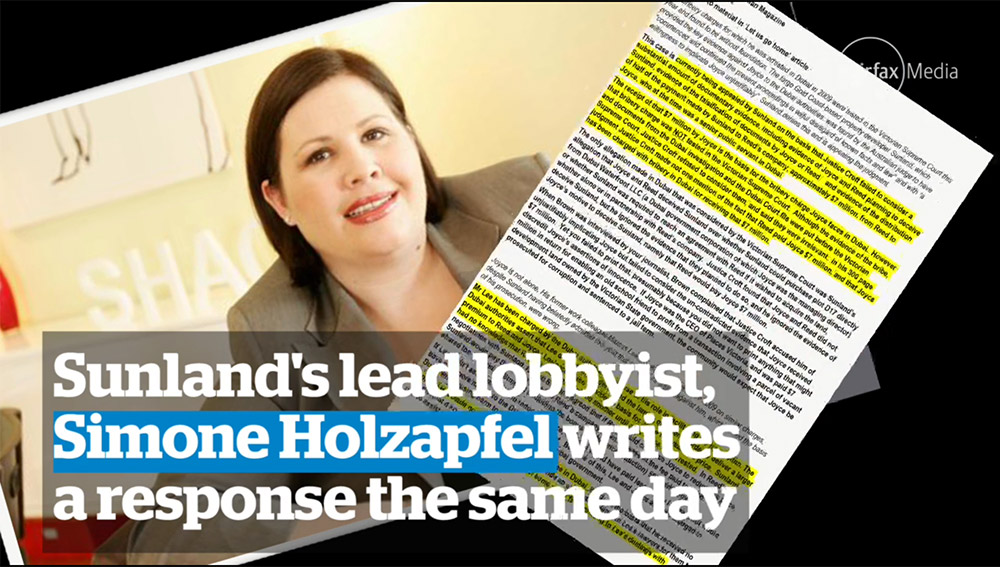 Meanwhile, Robert used Federal Parliament to give a glowing speech about Sunland and their activities which was later revealed to have been written by Holzapfel. Meanwhile, SOSA researchers discovered that at the same time that Holzapfel made 10 payments  of her 'own money' totalling $114,000 to Robert's LNP Fadden Fund, her company was in voluntary administration owing $430,000 to creditors including $355,000 to the Australian Tax Office. So where did the $114,000 come from?

This is all food for thought during the upcoming 2017 Queensland State election campaign and when we consider who to believe, trust and vote for...

The Current 'State of Affairs'

However, for the moment consider the following:

Tate and certain elements in the GCCC Economic Development and Major Projects Directorate have awarded the tender for a 'cruise ship terminal feasibility study 'on the Oceanside of The Spit, off Philip Park, to three organisations PWC, AECOM and MacroPlan Dimasi. Mayoral Office correspondence to a community member in 2014 revealed the GCCC Major Projects Directorate was responsible for the hidden 2012 Urbis Economic and VDM Ecological Studies for a Broadwater Masterplan.

PWC – their probity investigation into members of ASF China Consortium failed to find World Bank debarments and other outstanding fiduciary and judicial matters, while the person apparently leading the 'investigation' was coincidentally simultaneously on the Executive of the Qld LNP.

AECOM – currently listed as a partner to ASF China Consortium previously conducted a now totally discredited 'navigational simulation study' for cruise vessels entering and docking on the Gold Coast. The AECOM study used only 'displacement tonnage' vessels not 'gross tonnage' to conduct their 'safety' studies i.e. only the hull of cruise vessels without any of the 20-storey on-deck structures which would heavily affect the steering of cruise vessels in even the slightest of winds.
AECOM are also currently embroiled in a huge class-action against them for allegedly providing exaggerated vehicle travel numbers in their prospectus to investors in the Brisbane Clem 7 tunnel.

MacroPlan Dimasi – another partner listed on the ASF China website and possibly an in-house company owned by ASF.

So don't be surprised if Tate's ratepayer funded 'ocean-side cruise terminal feasibility study' comes out with a green-light to proceed but few facts or scientific rigour to support this recommendation. I am led to believe that one of Holzapfel's 'Branding and Graphic Design' directors will be employed by Tate (ratepayer funded) to spin the 'feasibility findings' to the public.
In fact, don't be surprised if Tate tells a full session of Council to take his word for the study and vote to approve it but not make it available for scrutiny by Councillors or the public, a la his recent statement that 'Anne Cherry' (sic) of Carnival Cruises supports a GC cruise terminal and he would be 'visiting her next Friday' to confirm her commitment... the sounds of crickets...

Listen to the audio

Check our Facebook page for updates on the wait for confirmation that Carnival supports a CST in open ocean off the Gold Coast. Nothing as yet is forthcoming. 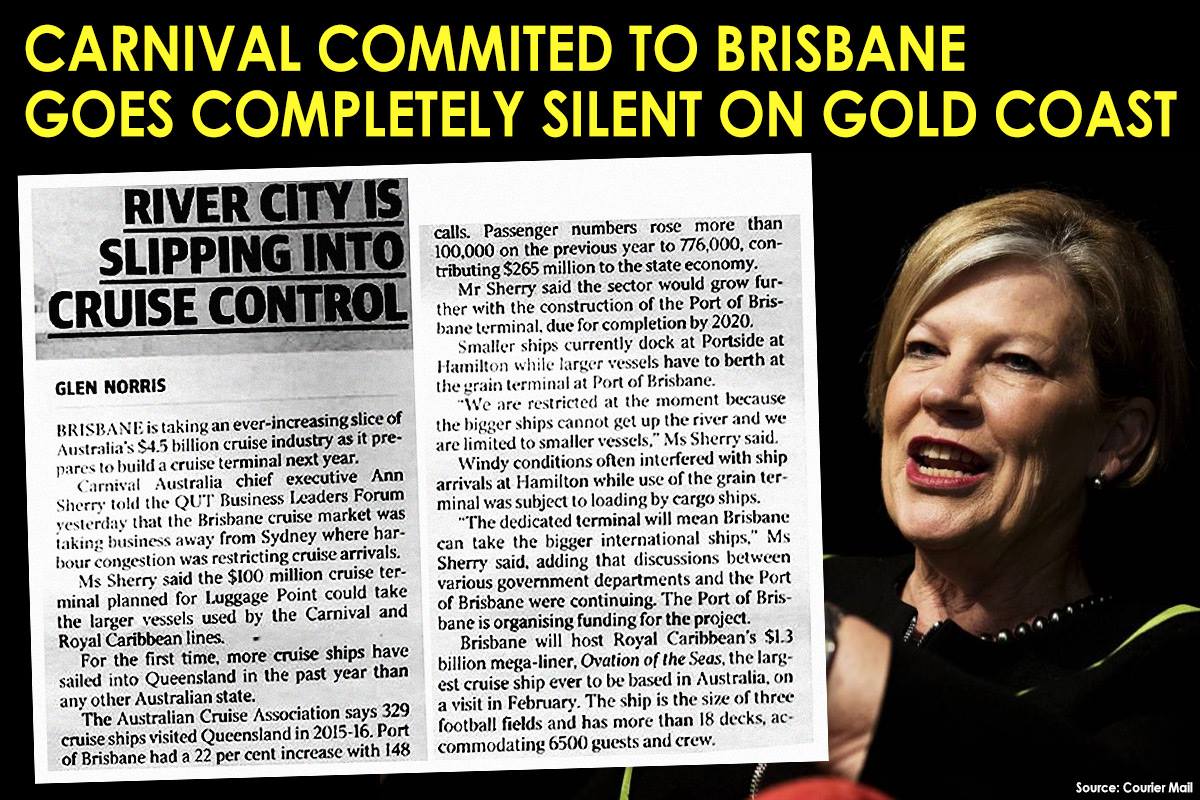