How to Report Potential Official Misconduct

Now that the Xcat dust has settled and the dogs are barking as the caravan moves on, it's time to address the gross lack of public and business consultation that surrounded the whole event.

1. If your business or tourism operation was financially or otherwise disadvantaged by the lack of information that should have been available through the GCCC website, over the counter or through GCCC Officers and elected officials and/or GCCC misinformation or lateness of information/notification of the Xcat Event's exclusion zones/race-times etc by those parties, then you are entitled to make a written complaint to the Office of the Information Commissioner.

Likewise, if you are a Gold Coast resident or ratepayer and you are unimpressed with GCCC Official justifications to spend close to $1 million of rate-payers funds on hosting and sponsoring the 2015 Xcat race (and a commitment to do the same each year, over the next 5 years) on the basis of false and/or misleading crowd attendance and television viewer estimates and follow-up statements by the Mayor regarding the same, then you too are entitled to put in a written submission to the Office of the Information Commissioner. 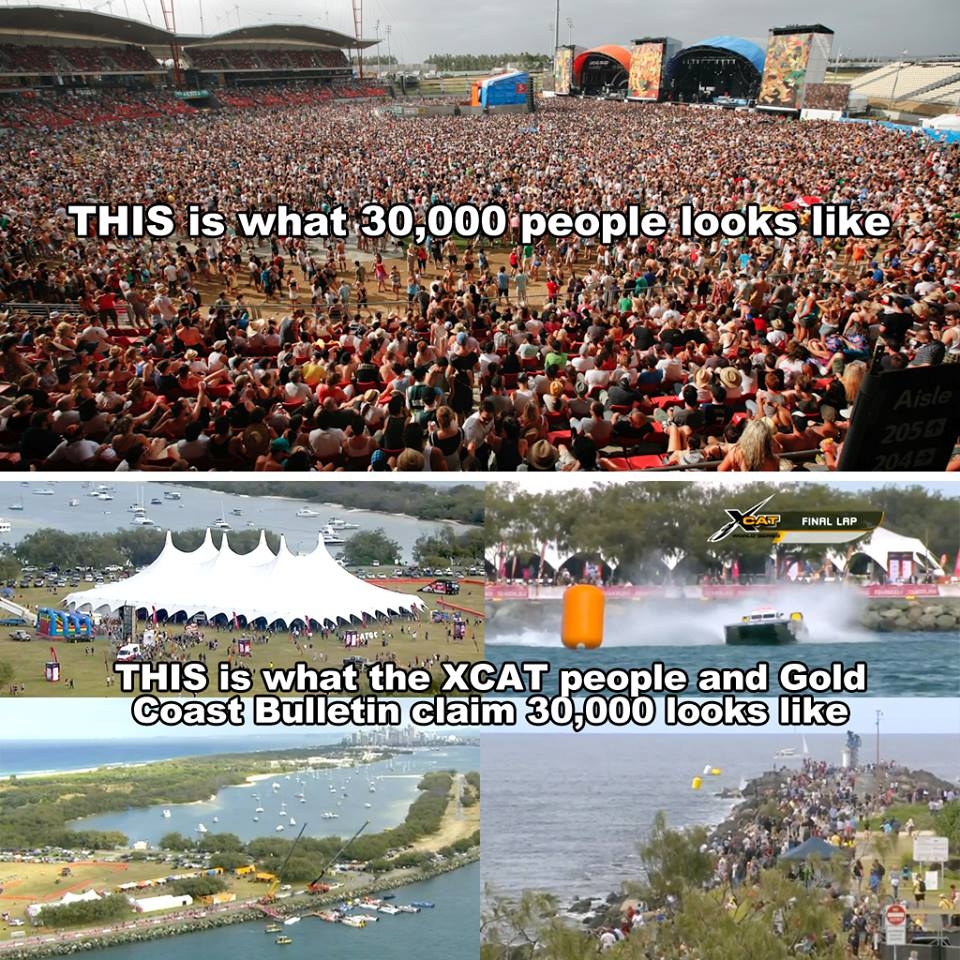 For example;
prior to the event Xcat and GCCC publicity claimed there would be 10,000 vessels looking on at the Xcat event. This would in fact have small vessels covering a surface area of 50 square miles. Documentary evidence during the event revealed 25-30 onlooking vessels which may also just have been waiting to gain access to the Seaway to exit the Broadwater in order to go to sea.

Update: We have received emails from boaties who state:

"I was anchored amongst at least 100 vessels off the northern inside of the seaway, then we moved offshore and anchored with at least another 20 to 30 boats"

Prior to and after the even it was been claimed by Mayor Tate that '440 million TV viewers' would view the event. In fact our research reveals barely 200 people watched the event live on the internet throughout the world. There is no record of any major cable, satellite or other TV network anywhere in the world covering the race live or afterwards and only 450 views on the Xcat Youtube channel.

view Gallery of photos from Sunday XCAT Raceday see for yourself!

Bus drivers on Sunday stated that 6 buses ran continuously on Saturday for a total of 450 passengers. 8 buses were scheduled for Sunday.

Were the Mayors ridiculous claims a response to the efforts of SOSA's Luke Sorensen who broke the XCAT story on our Facebook Page? 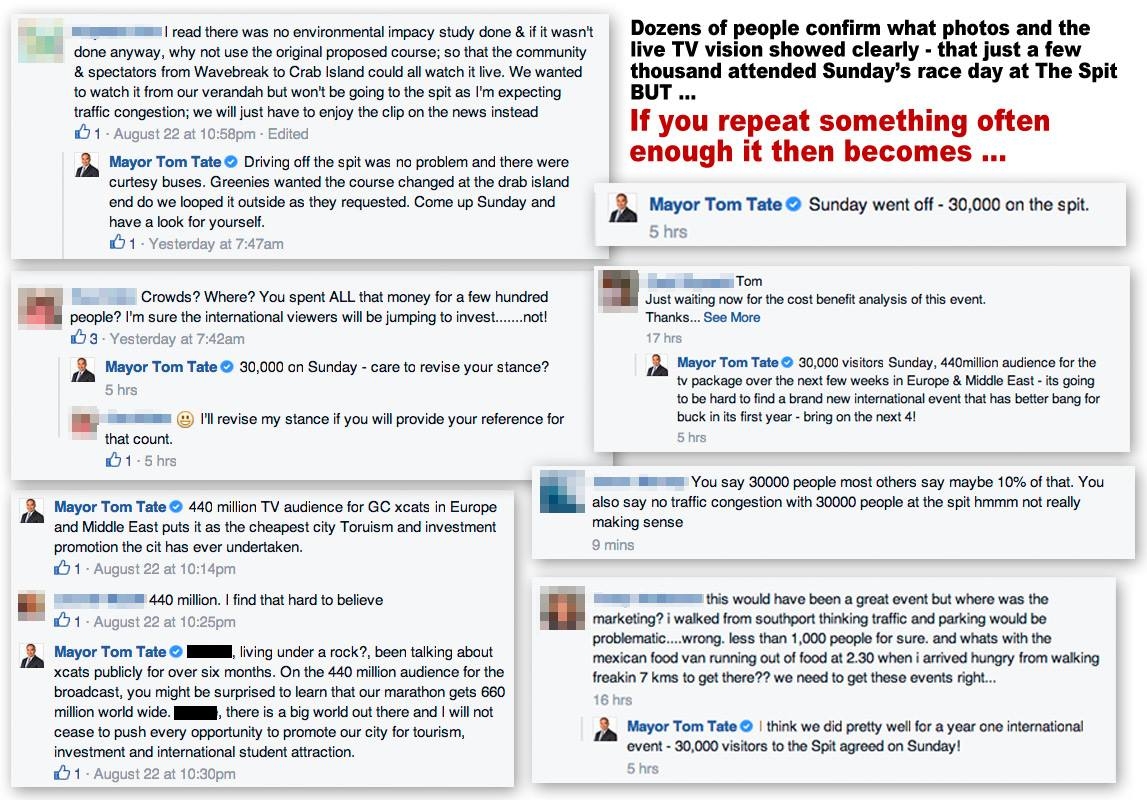 After the event it was claimed by Mayor Tate several times on his Facebook page that '30,000 people attended' the Gold Coast event on Sunday 23rd August, yet documentary video and photographs reveal daily attendances only in the hundreds, peaking at a maximum of 3000 on Sunday. Xcat PR suggested the event 'hosted up to 30,000 over the three days'.

Xcat organisers and GCCC claim that all key-stakeholders in the Broadwater and Seaway were consulted prior to the event. They claim these stakeholders consisted of Maritime Safety Queensland, Gold Coast City Council and the Water Police and therefore event organisers had adequately covered 'consultation with key stakeholders'.

The Office of the Information Commissioner is directly responsible to the State Attorney General's Department. They have similar powers to the Crime and Corruption Commission. Your written submission can be sent to:

Your submission could address some of the following issues regarding the GCCC's involvement in the Xcat event:

2. Also the Crime and Misconduct Act 2001, states that 'Official Misconduct' may include:

(a) individuals related to conduct…or attempt(s) to engage in conduct…that adversely affects, or could adversely affect, directly or indirectly, the honest and impartial performance of functions or exercise of powers of:

(i) A unit of public administration
(ii) [a] person holding an appointment.

(b) …conduct, or conspiracy or attempt to engage in conduct, of or by [a] person that is or involves:

(Attachment (UPA): Excerpts from the Crime and Misconduct Act 2001).

Examples of complainants may include:

Please note:
Vexatious and false complaints -
If you make a complaint or provide information to the CCC recklessly or knowing it to be untrue you may be prosecuted under the Crime and Corruption Act 2001. Such complaints are serious because they waste public resources and unfairly damage reputations.

Make a complaint by statutory declaration:

If you wish to make a complaint to the CCC, you must do so by statutory declaration unless there are exceptional circumstances or you are making a public interest disclosure. To make your complaint you will need to complete a -

Written submissions to the Crime and Corruption Commission can be sent to: