And so this is Christmas

After recently holding the most successful rally in SOS history, it is a great time to thank those who have helped us along the way.

As we write, there are more than 11,000 very active people on the Save Our Spit Facebook page as compared to the 200 on the ASF China fb page. This is indeed a measure of the current reality.

ASF simply don't get it - the Gold Coast community will not hand over our beaches and foreshores to a poorly executed PR campaign backed by a couple of self-interested, misguided politicians.

An example is ASF China's ridiculous glossy brochure spruiking the benefits of 75 cruise ship calls per annum to the Gold Coast. Yet in 2015, international cruise company itineraries reveal there are only 17 potential visits to a hypothetical Gold Coast terminal by cruise vessels.

Every navigational safety simulation study to date, except one superficial study organised by the Broadwater development proponent ASF China, concluded that cruise ships simply cannot safely enter the Seaway or Broadwater in all but the rarest of calm conditions. Independent experts have also scrutinised ASF's latest claims that '361 metre ships can enter the Broadwater in 30 knot winds' and conclude that these claims are based on fundamental flaws which will be presented by SOS to the public at the first opportunity. Meanwhile, ASF refuse to publish the full details of their 'navigational simulation study' to back their spurious claims.

No Initial Advice Statement (IAS) or Terms of Reference for the Queensland Government's 'Integrated Resort Development Project' (IRDP) have been made available to the public for proper scrutiny.  ASF China have refused to release this material (if it even exists) or any technical reports, even though they were informed by Deputy Premier Seeney early in 2014 that they were no longer bound by probity or commercial in confidence issues. The only information the public has been given are artist's impressions masquerading as a 'Masterplan' and media releases with misinformation and false data pretending to be 'Technical Reports'.

We ask why DP Seeney constantly moves the IRDP goal posts. When the public reveal worrying probity issues, World Bank debarments, misinformation to the ASX and outstanding judicial issues regarding alleged misappropriation of ASF company funds, Seeney keeps opening new doors for ASF to continue their participation in the IRD, while the public's revelations that have been passed onto the State Government are seemingly ignored.

Even the numerous letters sent by community members and SOS to LNP MPs (including the Premier and Cabinet Ministers) are now being forwarded to Jeff Seeney - is this code for 'this is Jeff's private project and we want nothing to do with it? It's now his problem?'

Even letters of complaint sent to LNP MPs, regarding the farcical 'community consultation' process ASF China are conducting, receive replies from LNP politicians with stock lines such as:

"Therefore I encourage you to provide comment on the proposal through the community consultation process currently being held by ASF Consortium". (DP Seeney Nov. 2014)

Hang on - that is what our letters are complaining about - the false and misleading information that ASF are currently peddling through their Broadwater shopfront and 'mobile shopping-centre sham 'community consultation' process.

Is the State Government now endorsing and supporting the false and misleading information being provided by ASF China to the public? For example, Gecko and SOSA reps were recently told at the ASF Broadwater shopfront that there would be 'no need to dredge an outer channel out to sea from the Seaway walls to accommodate large cruise ships and maintenance dredging for cruise vessels in the Broadwater would only be needed every one to two years'.

We certainly are not going to recommend that people have any contact with this ASF mob - especially as they are conducting a process that lacks proper independent checks and balances, lacks release of detailed technical reports and lacks verifiable information on dredging, cruise visits, job figures and the economic benefits of ASF's proposal.

What do the youth of the Gold Coast think?

What do young people on the Gold Coast think of ASF's proposal and the State Government's apparent support of ASF China?

17 year-old Ellen Palmer's speech at the recent 'Grand Theft Wavebreak' rally was inspirational for the 3000+ in attendance. Who can forget Ellen's statement to the rally crowd as she cast her eyes over them and signalled with her open hand? 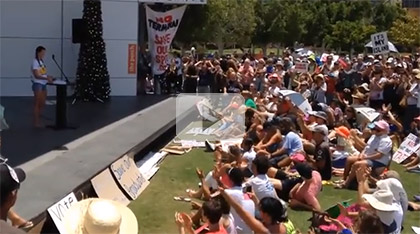 Ellen is a prime example of the Gold Coast's future – she is one of the many young people we encourage to achieve their goals - to see straight through the self interested parties and would-be public land grabbers. Yes, we are very proud of the many young people voicing their well-informed opinions on this issue who may be voting for the first time in the 2015 State and 2016 Local Government elections.

Perhaps the look in Lois Levy's eye said it all as Ellen delivered her inspiring and insightful speech - another amazing discovery, another rare gem who will carry on Lois' amazing legacy. After all, it was Lois who encouraged and assisted the establishment of the Save Our Spit Alliance and then allowed it to find its own feet, its own voice and its own strategies. It is pretty simple – let's preserve and maintain our amazing natural assets, public parks, foreshores, parks, islands and waterways for all to enjoy, including the preservation of the prolific, diverse and rare wildlife and marine life which currently inhabits the Spit and Broadwater.

Thanks for your support in 2014

To the many members of the community assisting SOSA in a myriad of ways, to our well-researched supporters who more than hold their own against the often banal, ill-informed rhetoric propagated by the self interested (or gullible or just plain thick) supporters of the ASF and other equally flawed proposals, we thank you.

So during this festive season when thoughts turn to enjoying time off with loved ones in our favourite locations pursuing our favourite activities, we hope everyone has an opportunity to do just that.

Rejoice in the fact that with all the events over the past 3 years, we still have the Spit and Broadwater as places to savour and this is surely only possible due to the commitment of everyone involved in our campaign.

Thanks so much for supporting SOS rain, hail or shine and we look forward to the future - a future that preserves our favourite places for generations to come. We always enjoy things more when we have earned them - the best way to maintain our precious open space is to enjoy it, be a part of it, look after it, share it and continue fighting to preserve it.