Tourism in the Time of Covid

The research articles "Gold Coast Tourism Part 1 & 2" were written 3 months before the Covid-19 global pandemic was announced and before the imposition of the accompanying restrictions to International and Domestic Travel in Australia.

However, it was pointed out in these articles that the Australian 2019-2020 bushfire crisis had already contributed to a downturn in USA tourist visits to Australia owing to the travel and health warnings issued by the US Government agencies not to travel to Australia while bushfires continued to rage.

Moreover, the official statistics reveal that Domestic Tourists spent $3.8 billion on the Gold Coast in 2018-2019 compared with International Tourists who spent only $1.8 billion that same year.

In preparation for travel within Queensland, North Queensland tourism organisations in The Whitsundays, Cairns, Townsville, Mackay and Outback Queensland began marketing tourism packages and discount opportunities to Queenslanders weeks ago in anticipation of intra-State travel restrictions being lifted.

Meanwhile, the Gold Coast’s main tourism agency, trading as "Destination Gold Coast", continued their myopic focus and their politicising of the global health pandemic by lobbying for the State border between NSW and Queensland to be opened, as if this would be the 'saviour’ of Gold Coast tourism.

Statistics for 2018-2019 reveal that 49% of the Domestic Tourists who visited the Gold Coast in that year were Queensland residents who spent approximately $1.8 billion, the same amount as all the International visitors in 2018-2019 and only slightly under the spend by interstate tourists to the Gold Coast.

So why would Destination Gold Coast ignore this reliable and high value source of tourist income for the Gold Coast i.e. Queenslanders?

And yet the Chair of the Board of Destination Gold Coast, Paul Donovan, still regards Queenslanders as an afterthought in his marketing focus as witnessed by his statement on 1st June 2020 when Premier Palaszczuk announced full travel freedom and overnight stays for Queenslanders within Queensland’s borders:

"It means we can start our marketing early, fine tuning our message in the intrastate market so we can try to get the jump on other states when interstate borders are open." (Donovan, 1st June 2020)

How does Donovan intend to "fine tune our message in the intra-state market" when there has been no obvious plan or marketing to Queenslanders?

Where are the incentives, discounts and accommodation-dining packages specifically aimed at Gold Coast residents who are looking for overnight and short term stays in Gold Coast hotels and resorts as a respite from more than 2 months in home isolation and similarly, Brisbane residents and regional Queenslanders, while State and International borders are still closed?

Where is the encouragement for the 49% of Domestic Tourists that traditionally visit the Gold Coast each year who are in fact Queensland residents?

Even on the day of the Premier’s announcement that Queenslanders can travel throughout the State, Donovan is obviously still hanging his Panama hat and white shoes on the State borders being opened.

The myth that International Tourists drive and sustain Gold Coast tourism has now been exposed.

Also Domestic Tourists have indicated that their interests are focussed on safe family holidays at the Beach and visiting National Parks while engaging in healthy, outdoor recreational activities and Wildlife/Nature experiences. They are far less interested in beach bars, casinos, night clubs or the next big "Tourist Attraction".

And following the eventual opening of Australian State borders, it is obvious that the first International borders to open will be for NZ tourists, who historically and once again will be our major source of international travellers given their Government’s hard but effective handling of the Covid-19 pandemic within their strictly controlled borders and the low rate of infections recorded within New Zealand.

New Zealand tourist numbers were increasing and only marginally below that of Chinese tourists whose numbers were decreasing prior to the Covid-19 pandemic shut down of our borders. 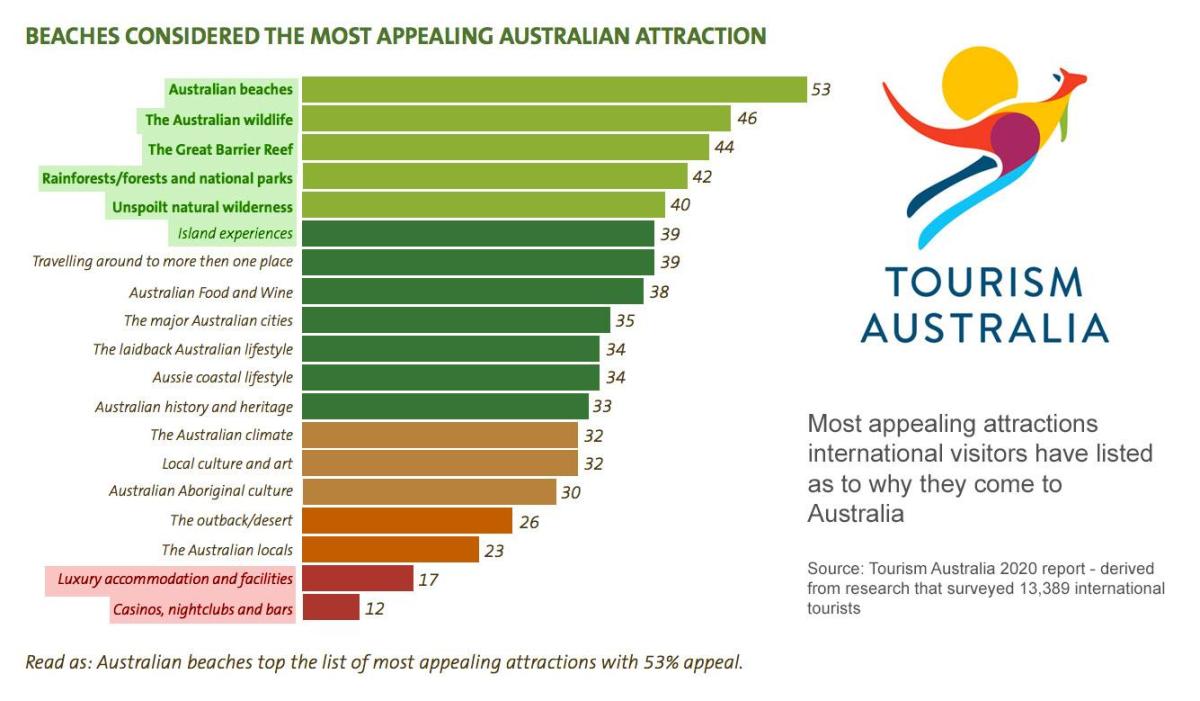 And just like Australian Domestic Tourists, recent Tourism Australia surveys reveal that International visitors, including New Zealanders, are most interested in spending time on our Beaches and in our Parks and Rain Forests while engaging in outdoor recreational and Wildlife/Nature experiences in comparison to the minimal appeal of bars, casinos and nightclubs.

One hopes Destination Gold Coast will get its act together and begin marketing and packaging tourism products and services to attract New Zealand tourists, given it may be a much longer time before North American, Asian, European and British tourists will be permitted into Australia, taking into account the struggle they are having keeping Covid infection numbers down and stopping deaths within their own borders (from Covid-19 and civil unrest).

If Destination Gold Coast, a private industry membership-based organisation that receives $millions per annum in Gold Coast ratepayer funded subsidies cannot improve its performance, it may be time to replace its Board or replace the organisation with one that is less biased, better researched, better informed and more effective in the use of ratepayer’s funds and one that truly represents the interests of its members; that is, Gold Coast tourism operators and associated businesses.

Surely the era of the "free-lunch" and overseas junkets for Tourism Board members is dead.