This week we learnt more about the shady players of Gold Coast politics writes Save Our Broadwater's Judy Spence:
1 The role of Simone Holzapfel in influencing politicians to defend Sunland and the timing and circumstance of her own contributions to the LNP
2 The role of politicians as Sunland advocates
3 The success Sunland has achieved in getting politicians to advocate their causes 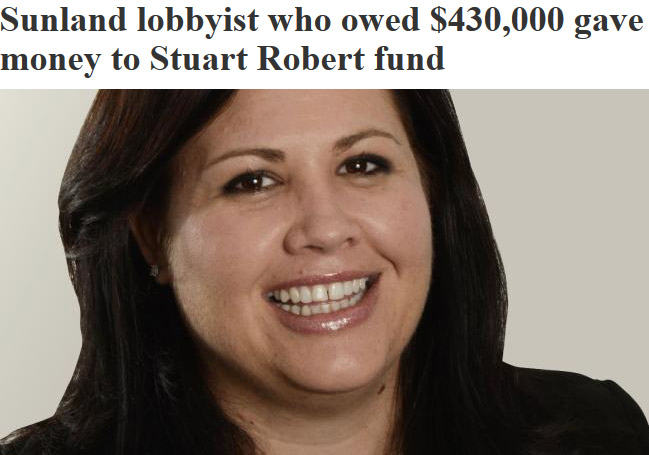 Yesterday The Australian reported that Simone Holzapfel, a former long time advisor to Tony Abbott, owed more than $430,000 including $355,000 to the Australian Tax Office when she donated $114,000 to Stuart Robert's election war chest, The Fadden Forum. At the time she was a lobbyist for Sunland. She says the money she donated was her “own money” but at the time the company, Shac of which she was the only director was in the hands of administrators.

On Thursday Judge Wall, veteran to the Southport District Court and Planning and Environment Court accused the Gold Coast City Council of failing to listen to residents' concerns about developments such as the controversial twin-tower Sunland project earmarked for the Spit as it would see beautiful Broadwater views destroyed. He said this council seems to be pro-development at any cost.

The same day we also learnt that Sunland's lobbyist Simone Holzapfel, lobbied Peta Credlin, Abbott's Chief of Staff to tone down the Australian Government's support for two Australians detained indefinitely in Dubai on bribery charges associated with Sunland dealing. Credlin did not pass the emailed notes on to Abbott, but the same day our own Sunland cheer leader, Stuart Roberts gave a speech in parliament defending Sunland which he called a "solid corporate citizen." This was in Nov 2012.  It was revealed that his speech was almost verbatim to the briefing notes provided to him by Holzapfel. The Australian reported: that speech could have cost lives. They reveal that at the time she sent the briefing notes she was working as Tom Tate's media officer. 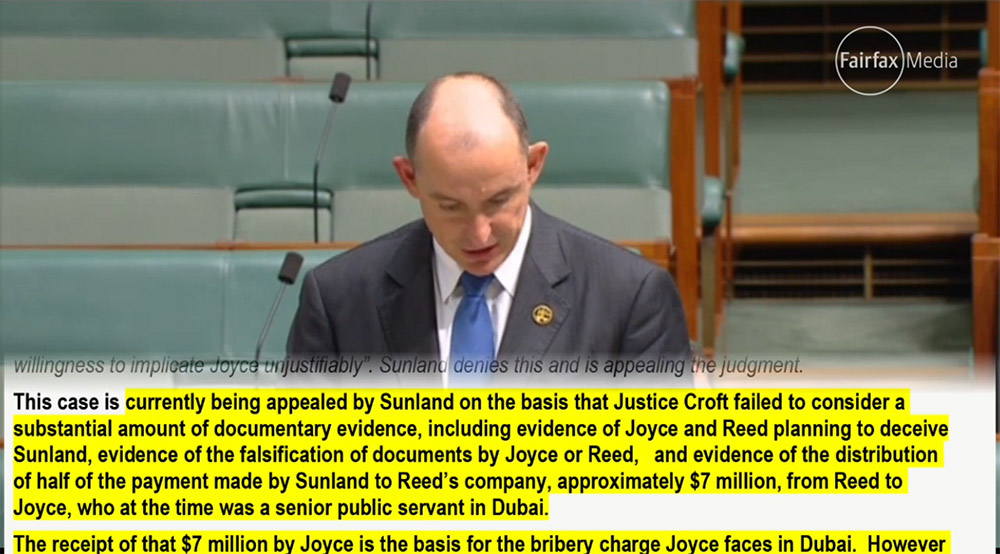 Roberts had done another speech in parliament the month before praising Sunland as a 'great Queensland company' and its directors as 'fine, upstanding men' and ‘pillars of the community'.

Let's not forget Stuart Roberts was sacked from the front bench because he was caught out doing the bidding of LNP donors.

On Thursday one of those Australians, Marcus Lee, broke his silence and in the Age said, "In making those speeches in parliament Mr Roberts not only denied me the presumption of innocence, while a serious criminal case was before the Middle East courts, but in doing so he also put me and my wife's life at risk with total disregard." Marcus Lee and his fellow Australian Mathew Joyce spent nine months in jail and a further four years under house arrest. He was fully acquitted in 2013 and returned to Australia. He is now suing Sunland for loss of income, distress and legal costs.

Sunland is very successful in getting politicians to use their public positions to advance their causes. Recently Mayor Tom Tate bent over backwards to get Sunland's proposal to build 44 storey towers on the public land at the Southport Spit over the line despite his own planning officers 14 strong recommendations to oppose it. He even had the editor of the Sunday Mail doing his best to convince people that they wanted to see the Spit covered in high rise towers.

Tate has his own praetorian guard and they pulled out every stop to assist the project get up. Chair of the Planning Committee, Cameron Caldwell circulated a four page document to his fellow councillors before the committee voted on the Sunland proposal, justifying grounds to support it despite the strong opposition of his own department. The Fairfax media reported this week that he received a five word text from Stuart Roberts just prior to the council vote. 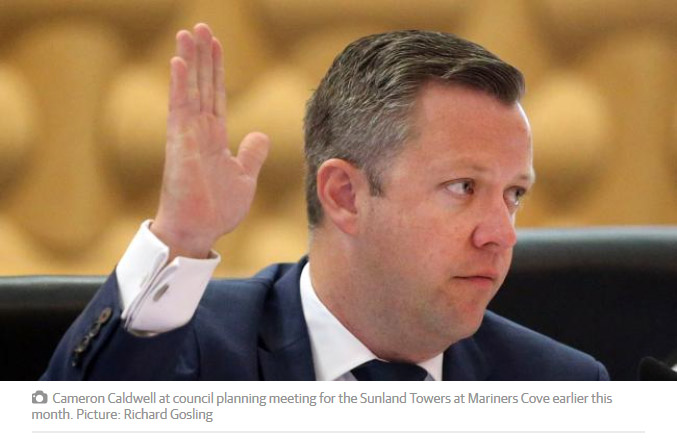 The council meeting itself was a shameless attempt to get the Sunland project over the line with Tate and Caldwell doing their darndest to convince fellow councillors to support it. They showed a promotional video from Sunland and even suggested the council might spend millions on a bridge upgrade just to make it happen. When they realised they didn't have the numbers, they moved a motion to give themselves 12 months to buy time.

This week Sunland announced that it was withdrawing its plans for the Spit, no doubt because their legal advice would have informed them that they had no chance of winning a case in the Planning and Environment Court. But their media position was that their building would have been a world-class landmark. They still have not conceded that the majority of the public do not want to see any high rise on this public land.  Sunland's determination to built apartment blocks for the mega rich may have the support of the LNP politicians on the Gold Coast but as Judge Wall said this week, "It's important to have an independent umpire in the Planning and Environment Court".

On the same day that Sunland withdrew its application Caldwell called a press conference to say it was the "ultimate gesture of goodwill" on behalf of Sunland. He spoke of his "heavy heart" at Sunland's decision.

It is evident that Caldwell and Sunland showed no acknowledgment of the Reachtel Poll we commissioned that showed 60% of people don't want to see high rise on the Spit.

If this isn't murky enough there is more.

This week the Australian reported ASF Casino that the Chinese-government owned company, The Guangzhou Dredging Company involved in the ASF consortium which also wants to build as many high rise towers on the Spit as they can convince the Queensland Government to allow them, is linked to the building of artificial reefs in the internationally explosive South China Sea dispute. This is the same company that only two years ago almost convinced the Queensland Government to allow them to build a small city and cruise ship terminal in the middle of the Broadwater until community opposition killed the plan.