The BMP disintegrated (it's gone, defunct, dead) in the wake of an unprecedented barrage of advertising about a project the public know next to nothing about.
A phone poll of only 2800 people was conducted by Newspoll that apparently didn't mention a casino nor give an indication of the true scale of development, had only 32% of those polled who "knew a lot about the project" and was then the basis of a very firey debate amongst councillors over what to say to the State Government that required an indication of support by May 5th.

With those low numbers there could be a few as 100 people polled who regularly visit the Spit: maybe 10 surfers (2 regular Straddie Surfers), maybe 1 or 2 divers, a handfull of boaties or people that use the Seaway to fish, people that use the foreshore with their families. In short a poll designed to get a result favourable to ASF aspirations of a casino under the IRD process.

Are we able to scrutinise the raw data? Can we view the feedback that many people put on the ASF project website to verify what was presented as accurate? Or are we left to accept the figures of a group with parent companies having well documented debarring by the World Bank.

In describing the poll results a Newspoll representative mentioned the general response from the participants indicated an attitude of:

"I don't think it is going to affect me much"

Not everyone is a fan of Newspoll:

"There are many ways a poll, if manipulated, can get you a false, convenient result."

'Newspoll is widely known as "the Bill O'Reilly of statistics"'

If you are living in Biggera Waters and are about to lose your view of a lifetime, are a surfer and risk ruining or not having access to your surf spot or are a boatie about to lose access to boat ramps this often touted as 'statistically valid' opinion does not reflect how you feel.

It effects some people hugely and others who do not use the area, possibly thinking the jobs spruiked by the advertising blitz are a benefit. The Mayor opening claimed 36,000 jobs to be created by this project in an ABC 91.7 radio interview.

The results are not surprising from this methodology and this is not a criticism of Newspoll. However politicians are acutely aware of activists, or people adversely effected by decisions they make.

A far more robust, fair and sophisticated approach is required where select groups within the Gold Coast (and Brisbane for that matter) are heavy users of an area. Hence the required community support demanded by the state government is not reflected in this polling method initiated by the proponent.

Was the brief something like - what is the cheapest fastest way we can make this look like widespread community support?

Agitation Evident
The agitation of Mayor Tom Tate and ASF China's Allan Fife was evident to all those watching the meeting live.

Councillor Robbins articulated the concerns of a poll being conducted on a project no one knows any facts about and an indication required to be given to the State Government one way or another as to whether there is council support for what is now an IRD with the BMP being concluded without a preferred proponent.
Allan Fife did indicate a CST was revenue negative, and needed a Casino to pay for the dredging etc but also made a startling claim that the CST was not a transit port after a question from Councillor McDonald. The infrastructure for non transit ports is massive - and certainly not evident in the 'artist impressions' seen to date.

In contrast to the strong comments of Councillor Robbins, were the usual Gates, Crichlow, Bell, Taylor blind support for whatever the Mayor seems to nod at. This is a concern given the scope of this concept. No mention of the Mayor's possible conflict of interest or his obvious enthusiasm regardless of the lack of detail available.

Absolutely no detail to make an informed decision

No one knows where the CST will be, what other buildings are included in the proposal and what loss of boat ramps, parking and up to 3.75 kms of beach and foreshore and visual amenity the community loses. 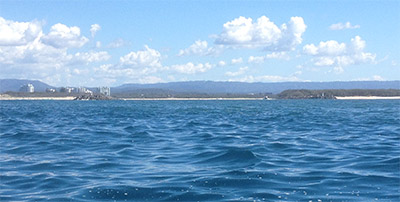 Listen to the audio (below) - is this the Gold Coast equivalent of Julia Gillard's Misogyny speech?

Artist Impressions instead of detail 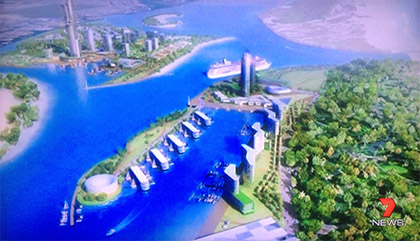