Last chance to lodge your objection

URGENT CALL - THE FUTURE OF THE ENTIRE SPIT is on the line - if the Sunland towers at Mariners Cove are approved by our sitting councillors it will forever shatter the height limits for The Spit. It will remove the current legal, planning and environmental boundaries for developments and set the precedent for a wave of encroachment northward of new high-rise residential apartments, hotel and casino developments on Spit Crown Land (public assets).

IMPORTANT DETAILS are documented below as to how you can help save this area from being consumed by massive, inappropriate private developments on publicly-owned land which is in deep contrast to SOS's desire for the State Government to implement a holistic, coordinated BROADWATER and SPIT MASTERPLAN in consultation with the current users and the community.

The various proposals in play at the moment not only include a casino, hotels, multiple residential towers in non-residential zones, private exclusive marinas, large commercial and retail operations but will also necessitate major dredging and landfill of the eastern Broadwater foreshores and waterways. 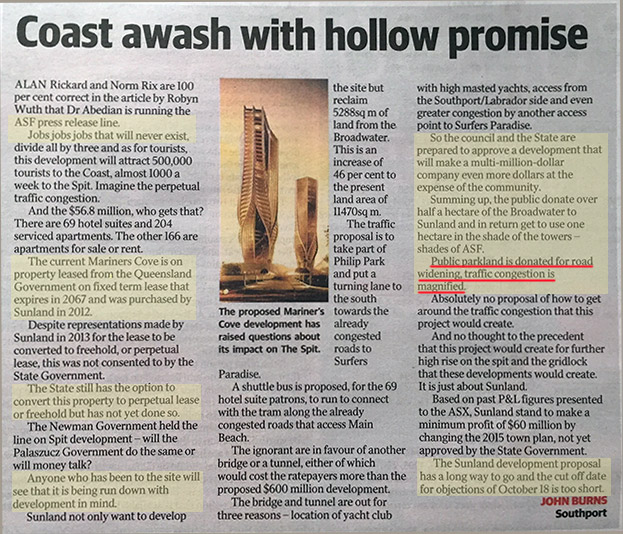 Overloading of water, traffic flows, parking, storm-water and sewage infrastructure in the precinct has not been adequately considered.  The negative impacts on the social, community and recreational values of The Spit; the visual amenity; shadows on public open space, waterways and beaches; and public accessibility will be significant.

The sheer scale would set an irreversible precedent that would forever see The Spit become a developers' haven and no longer a community space where the current low-profile commercial, hospitality, maritime and tourism activities complement the transition from the intense urban and commercial zones of Main Beach and Surfers Paradise to the open public spaces, parks, beaches, marine habitat and wildlife corridors of Federation Walk Reserve, Doug Jennings Park, Marine Stadium and the Seaway. Town Planning 101!

The reports, recommendations and GCCC policy have already been set that should preserve The Spit for generations to come, but our councillors are being asked to consider ignoring 40 years of expert planning, 40 years of significant and conclusive community consultation and community sentiment - to put a stack of foreign developers at the front of community interests and approve the transformation of The Spit from low-impact and open space into an extension of the Surfers Paradise dystopian high-rise jungle is irresponsible, immoral and currently illegal under the Sustainable Planning Act 2009 and the City Planning Scheme (current and Draft 2015).

The recent and numerous proposals for The Spit, Broadwater and Wavebreak Island are not "integrated resorts" on private real-estate as purported by their proponents, they are SEGREGATED PRIVATE ENCLAVES on public land! 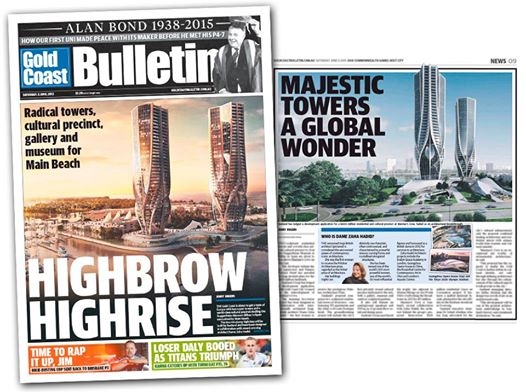 Lodging a Formal Objection to GCCC planning got to -:

"But there are hidden dangers in doing business with China: endemic corruption; a lack of transparency in both business and the legal system, and questions about where the money is coming from and whether ill-gotten gains are being laundered."

"With billions of dollars flowing out of China, international money laundering experts are warning that some of it is making its way into Australia:"

With billions of dollars coming to the Gold Coast why would "delegated authority" be used to allow a Mayor to give specific Chinese developers favours by fast-tracking their proposal(s) without proper scrutiny or the checks and balances expected of a Local Government who is supposedly conducting due diligence and a transparent process?

Surely the intent of delegated authority is for the smaller suburban issues like fences, back yard pools, and similar activities which do not require intense scrutiny by full Council or Planning Committee.
'Delegated Authority' was surely not intended for the 'largest project in Gold Coast history' the Forise Towers on the old Iluka site!

Has the new contender for the Gold Coast Mayoral race already had a significant impact on the behaviour we have witnessed over the past 3 years? The Brisbane Times thinks so:

"Frustrated Gold Coast city councillors on Wednesday at the council's City Planning committee, recommended amendment of the lodgement advice for major projects meaning all councillors must be notified of major projects before approval."

"Cr Caldwell told the committee that public debate over the way the Forise Holdings development had been handled had provided a political weapon to a mayoral candidate standing against mayor, Tom Tate."

So it was mainly political pressure with the upcoming election that forced Tate and Caldwell to come clean?

It didn't start well for Tom with a caller Peter from Palm Beach passionately articulating how a decision regarding a non-approved tree caused him much grief and devalued his property.

This raised very little empathy from Tom, he sided with the developer.
Peter: "We followed the rules, they didn't follow the rules - council came down on the side of the developer...devalue anyone's house along the coastal strip it isn't right"

SOSA Reps have never been granted the opportunity for a face to face conversation with Mayor Tom Tate but this is as close as it gets with Nicole putting questions to the Mayor.

It wasn't pretty as you can see from the comments below:

Listen to the segment: http://www.saveourspit.com/LY?U=TTTalkBackABC

Some questions put to Tom Tate by Darren Crawford:

Darren Crawford: Tom, since we're talking about development submissions can you please tell us why "delegated authority" was used to approve the development on the Iluka site when it failed 2 out of 3 criteria in relation to shading, yet did not go to full council or even the planning committee? If the development was red-flagged as not being acceptable, shouldn't the Cllr's have been advised?

Darren Crawford: Nicole the submission was advertised in the Australian Newspaper only on July 25 - it did not get publicised locally

Darren Crawford: I'm sorry but it didn't "tick" all the boxes, it failed the peer review - Nicole can you get him to answer that please, he has just lied.

Darren Crawford: Tom, the peer review also states that there were discrepancies in the GCCC testing process i.e. there were issues with the area that was tested and the times that were tested. When I visited the Sunland office to look at their Mariner development I was told that the GCCC only required them to test for shading at 9am, 12pm and 3pm - this appears to be very inadequate and does not take into account much longer days in summer in particular when the sun is in the west creating maximum shade on the beach. Regardless, if it is an independent report or not, why the secrecy in not allowing full council to assess the Iluka development?

Darren Crawford: Nicole and ABC Gold Coast, I just want to say thank you for providing this forum today. Many residents of the Gold Coast who have valid questions for the Mayor struggle to get any time with him either because they are blocked on social media or they cannot get past the Mayor's Office, either in person or via email, so thank you 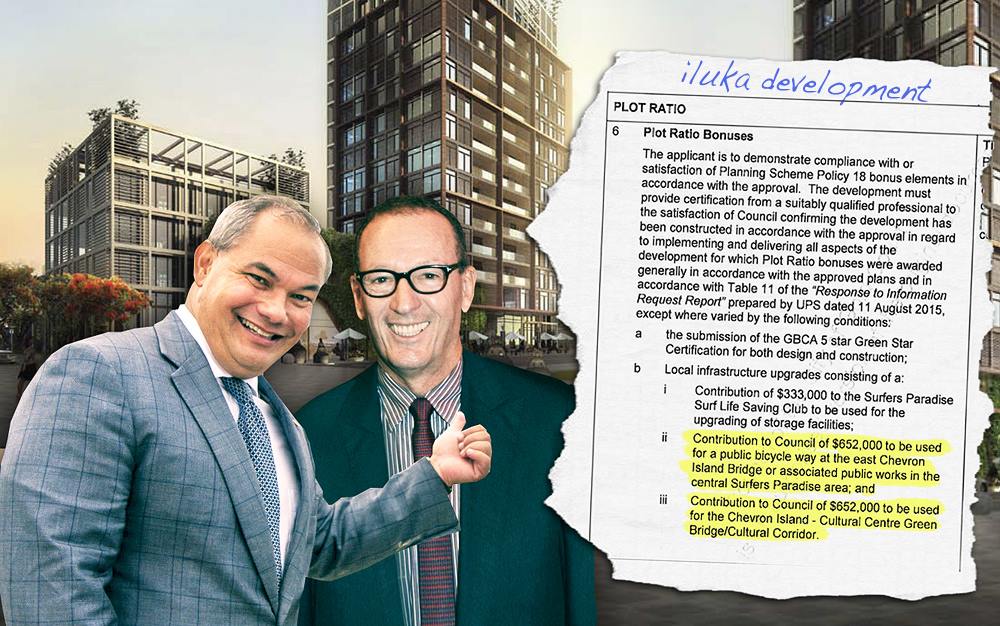 '"This building will be the signature tower on the Gold Coast skyline, a genuine world tower for a world city," Mr Hickey said.'
...
"In a letter to Gold Coast mayor Tom Tate in July, Forise chairman Xin Wang said the tower was to rival anything built on the Gold Coast."

And so it goes, secret meetings during recess.

SOSA discovered a GCCC Minute where senior GCCC officers suggested a plan of 'controlled messaging' by Councillors when dealing with the community to ensure the 'cruise ship terminal' project was expedited quickly to avoid the obstacles to its construction that they had confronted in the past.

If you think the parallels stop there with the current Forise project bear this in mind:

Surely this sort of thing could not possibly have happened with ASF China Consortium being named as the 'possible proponent' for the Broadwater Marine Project after intense lobbying from certain elected and employed GCCC officials, you know the development based on the Mayor's 'mandate' for a small cruise ship terminal that became a 100 hectare public land grab on Wavebreak and the Spit for numerous apartments blocks, hotels, retail, private marinas etc for sale on the foreign real-estate market (along with accompanying Significant Investor Visas [SIV] aka Australian Residency Visas) and then somehow has recently morphed into its current form, a Casino Licence come Segregated (oops Integrated?) Resort Development on a 3 storey/non-residential area of the southern Spit.

Has this State Government established a social licence for a second casino on the Gold Coast especially in a location that is intended for outdoor recreation, marine and wildlife habitat and passive sport and tourism activities?

We don't think so when a casino is a windowless building intended to entrap its visitors so they don't know whether it is day or night and most especially when one considers the September 2015 sitting of Parliament when the Labor Government argued the strong relationship btw gambling, financial stress and domestic and family violence.
And at the moment unfortunately the Gold Coast is the epic-centre of domestic and family violence in Queensland. More cases are heard in the Southport Courts than Logan City and Brisbane City combined.

Tom's friend and 'long-time lawyer Tony Hickey' (Gold Coast Bulletin 06/11/13) was granted approval for a tower development on Chevron Island, well above the previous planning height limits - Tom cited a perceived conflict of interest, but of course voted to approve it anyway.
ASF China Consortium emerged as the front runner for a massive private/commercial takeover of Wavebreak Island, Broadwater and The Spit after Tony Hickey, Tom Tate, Sahba Abedian and 'others' visited China and Taiwan in November 2012.
Hickey then announced himself as an official spokesperson for ASF, followed by Hickey Lawyers being listed on the ASF website as a 'partner' in the ASF Consortium. The current State Government has since invited ASF to submit a 'detailed plan' for a Casino and 'Integrated Resort' on 6 hectares of public land south of Seaworld.
We are not sure whether Hickey accompanied Mayor Tate on any of the Mayor's ten (at least) 'self-funded' and undocumented visits to China during 2014.
But wait there's more! Hickey has now announced himself as spokesperson for Forise and Hickey Lawyers as the law firm representing the Forise Towers project - as this article shows this is perhaps 'a bridge too far'.