The Save Our Spit Alliance along with numerous other community, tourism, small business, wildlife protection and environmental groups have been heavily involved in 'Broadwater and Spit Masterplan' processes for over a decade. The new kids on the block, who are now asking for consultation on THEIR 'plans', 'ideas' and 'visions' ignore at their own peril this history of past community participation in proper, transparent and detailed planning processes for the Spit and Broadwater. 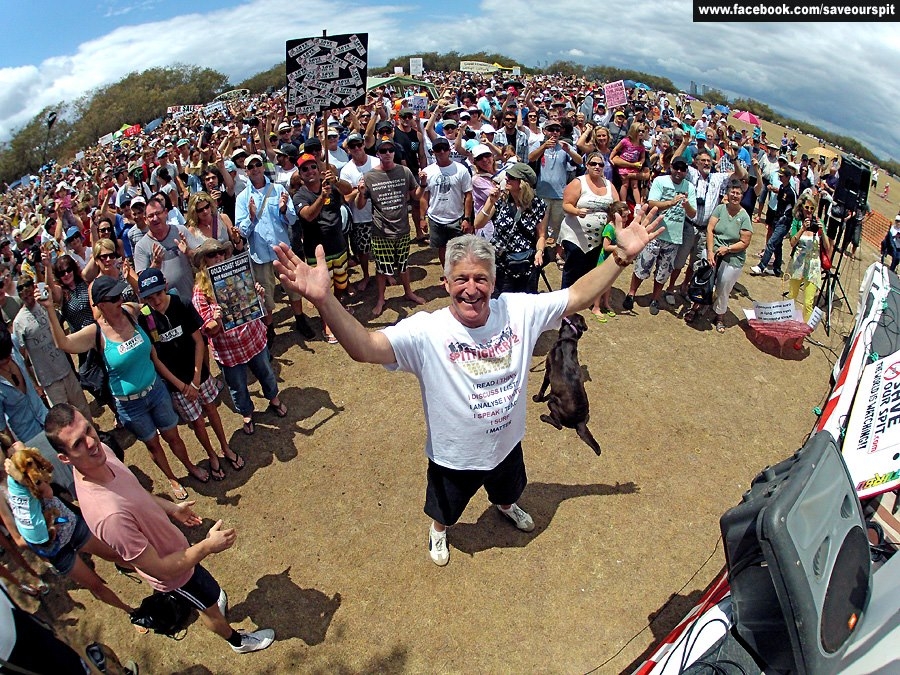 Bryn Lummus has attended SOS meetings and formally met with me on one occasion earlier this year. At that time Mr Lummus preferred not to discuss or show me any details of his draft 'masterplan', expressing his lack of trust that his ideas would not be 'leaked' prior to his public announcement of them. However, Mr Lummus did talk about his general concepts of 'activation' and 'conservation'. I questioned him regarding his preoccupation with dividing the world into binaries, i.e. retail, hotel, casino, high-rise apartment zones as 'activation' and wildlife and marine habitat zones as 'conservation'. I recommended he also consider the concept of 'recreation' which encompasses a balance between soft infrastructure and natural environments to support the huge Broadwater and Spit economic drivers of diving, snorkelling, surfing, swimming, kayaking, fishing, whale-watching, boating, sailing, picnicking, walking, cycling and fitness/health/sports activities such as triathlons, open swimming races, 'boot camps' and elite sports training locations etc. As presented in the Gold Coast Bulletin, Mr Lummus chose to ignore 'recreation' as a key component of his 'masterplan'. Of course recreation is the most difficult component in which to achieve the appropriate balance during planning processes. In my opinion, Mr Lummus does propose some positive elements in the 'masterplan' revealed in today's news article but he took the easy way out by ignoring the difficulties of addressing 'recreational' planning and infrastructure, despite my urging him to consider this important element.

Yes, there needs to be a State Government process and framework put in place towards a 'Broadwater and Spit Masterplan' especially when we can't trust our current Mayor to initiate a transparent and proper process through Council. Prior to Tate's election in April 2012, this process had been ongoing, in particular following the GCCC's decision to proceed with construction of the Seaway Training Walls in 1986. Delft Hydraulics Nederlands were asked (at the request of Keith Williams who sat on the then Waterways Authority) to investigate the possibility of a cruise terminal inside the Broadwater. Delft Hydraulics concluded that the Seaway Wall design was not able to handle the channel depths required for cruise ships of the day which had drafts of 6 metres and required a further 2 metres Under Keel Clearance (UKC). The cruise ships of today require dredged channels 12-15 metres below the Lowest Astronomical Tide (LAT) which makes the original engineering of the Seaway Walls even less able to handle the channel dredging depths required for the safe entry of contemporary cruise ships. Every independent report since 1986 has rightly concluded that a Seaway or Broadwater cruise ship terminal would be "unviable in engineering terms, environmentally and economically".

Since 1986 and until the election of Tate in 2012, a 'Broadwater Masterplan' process had been in progress, the outcomes being the Harbour Vision 20/20 Report recommendations by GCCC (2003), the GCCC Tides of Change report (2008) the draft Local Area Plan for the Spit (2003), The Federation Walk Reserve Masterplan, the current City Planning Scheme and the draft City Planning Scheme 2015 which is currently being assessed by the State Government. All of this work is the result of transparent and detailed technical studies and public consultation with key businesses, tourism operators, community and environmental groups. I pointed this out to Mr Lummus during our recent conversation and asked him to familiarise himself with these 'laws', 'reports' and 'recommendations'. It his clear in the 'masterplan' presented in the paper today that Mr Lummus chose not to incorporate many elements of the 25 years of pre-existing processes, reports and recommendations towards a 'Broadwater Masterplan'.

And of course the two most important Broadwater studies ever commissioned by any level of government, the ratepayer funded Urbis Economic and VDM Ecological reports towards a 'Broadwater Masterplan' were deliberately hidden by GCCC officials when they should have been made available in the months immediately after the current Tate GCCC was elected in April 2012. The existence of the two reports was only revealed after a community member obtained them through a Right to Information (RTI) request in late 2012. 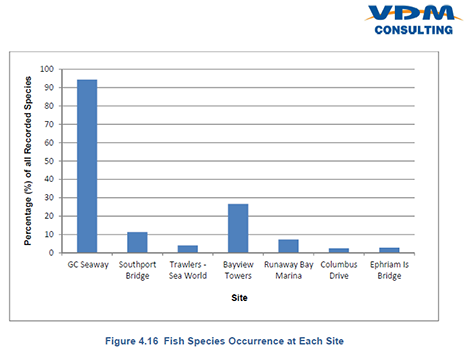 "VDM Consulting was commissioned to provide specialist technical and professional environmental services to assist the Gold Coast Waterways Steering Committee (GCWSC) in the development of a Broadwater Masterplan.
The objective of the Masterplan is to provide a robust and definitive tool that will aid in future waterway and land use management of the Gold Coast Broadwater.
This report presents the findings of ecological investigations to establish baseline information that will inform the master-planning process. The study area for the purposes of this report is the Southport Broadwater extending from the Sundale Bridge in the south to Sovereign Islands in the north. A section of the western Broadwater from the Southport Pier to Biggera Creek in the north, on the inside of Wavebreak Island was assessed as part of an earlier study undertaken by VDM Consulting."

Since Tate was elected following an LNP financed Mayoral campaign the public has been exposed to a plethora of supposedly 'unsolicited ideas, visions and masterplans' for the Spit and Broadwater. One of the problems is that the first details the community ever get regarding these 'masterplans'  are when they are plastered all over the front page of the local newspaper which is definitely the wrong way to start any 'community discussion' and/or 'consultation'.

So looking back, one week after Tate was elected Mayor in April 2012, we had Sembawang (India) wanting to takeover Wavebreak Island in its entirety and the first the community hear of it is on the front page of the paper which blindly support this 'visionary' idea. Next we get front page (and numerous other pages) of ASF China Consortium's attempts at a complete takeover and trebling of Wavebreak Island with land fill for a private tourism enclave, in addition to private commercial development on every square inch of open space on the Spit under the guise of the 'cruise ship terminal we really need'. And none of the jobs and economic benefit figures propagated by ASF China by their PR machine have ever been substantiated in publicly available and detailed independent studies.

Not even the cruise companies considered Gold Coast as a viable option:

"unlikely to use a Gold Coast facility anyway
...more interested in increasing capacity in Brisbane" 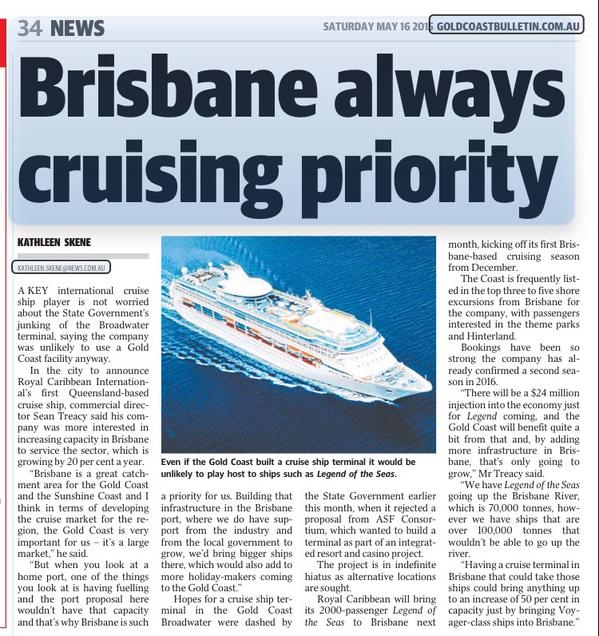 Then Breakwater Group hit the front page with an artificial harbour and apartment developments (and the now ubiquitous cruise ship terminal) carving away two-thirds of the Federation Walk Reserve which is currently protected by State laws as a 'Coastal Conservation, Beach Preservation, Park, Reserve and Wildlife Habitat' zone. 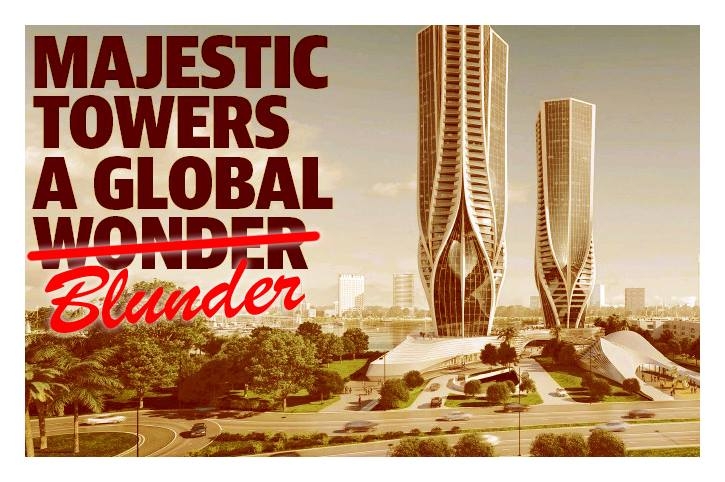 And Sunland, who complain that because the Versace building (Sunland designed and constructed it) had to take-up the entire footprint to get its desired commercial outcome (because of the existing 13.5 metre height limits) that this caused the obliteration of the ground level views through to the Broadwater and therefore was an unsatisfactory design. Sunland now claim (mea culpa?) that their proposed two 44-storey towers on the Spit are designed to allow ground level views through to the Broadwater. However, they fail to mention that the existing City Planning scheme and the draft City Planning Scheme 2015 (after transparent and detailed consultation with all key-stakeholders) currently being assessed by State Government restricts building heights in that area of the Spit to 13.5 metres maximum. Sunland also seem oblivious to the fact that their ground level views to the Broadwater in their twin towers proposal will require all those current apartment owners in Main Beach and on the Western Broadwater to have their uninterrupted views (for which they paid handsomely for their visual amenity as a component of their apartment purchase price) obliterated forever by the 44 storey towers. And yet once again the first that the community and affected apartment owners hear of Sunland's 'twin towers wonder' is on the front page of a news article.

And now we have today's front page headlines, 'Waterfront city vision'. Every architect, developer, 'proponent' seems to want a 'Broadwater Masterplan' discussion and community consultation as long as it is only their proposal that is the starting point for the 'discussion and consultation'.  However, if they are going to ignore the existing 25 years of reports and recommendations that have followed detailed public consultations and participation and ignore the International, Federal and State Environmental and Wildlife protection laws and treaties, ignore the existing and future Gold Coast City Planning Scheme (2015), then they should not be surprised when they are highly criticised and scrutinised by the community following the shock of front page announcements, PR spin and advertisements for their 'plans and proposals'.

The Save Our Spit Alliance along with numerous other community, tourism, small business, wildlife protection and environmental groups have been heavily involved in 'Broadwater and Spit Masterplan' processes for over a decade. The new kids on the block, who are now asking for consultation on their 'plans', 'ideas' and 'visions'  ignore at their own peril this history of past community participation in proper, transparent and detailed planning processes for the Spit and Broadwater.