Peter Beattie and Anna Bligh (ALP) are remembered more fondly now.
In 2006 they admitted you could not safely navigate in the Broadwater. Also envrionmental concrens and construction costs out-weighed even the most optimistic economic predictions.

They abandoned the Cruise Ship Terminal (CST) it didn't stack up.

The only change since then is the ships are bigger and the weather is more unpredictable. A self-interested land grab. LNP anti Cruise Ship Terminal (CST) pollies have done a well documented back flip.
So excuse any cynicism here because when one guy says black and then white with equal conviction many of us turn off.

Dawn Critchlow, John-Paul Langbroek and Jeff Seeney have backflipped on their pledge to protect the Spit.

So Tom Tate [GCB 6-3-2013] crying foul over survey results indicating overwhelming opposition to a CST is in sorts a victory to Social Media.
The community has a voice - you simply don't like what you hear. 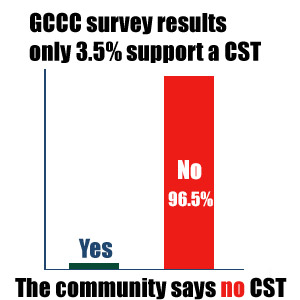 In fact so dissappointed are Council leaders they ignored the results of an open community consultion survey and conducted a new survey based on an invite only select group refer questionable survey.
So when those results still indicated a lack of support for their 'message' we were the villains again.

"Mayor Tom Tate said he favoured the in-person results because the online results had been "tainted".

Pro CST people had equal opportunity to vote - perhaps there just aren't any or they do not have access to a computer.

(more on this below)

They label us with the title of protesters. And certainly in the Beattie era we received tip offs and often confronted Beattie and his minders at secretly planned media conferences.

On one occasion on the eve of an election there were a handful of us hiding behind barbecues on the Braodwater near Charis Seafoods.
In the end even Beattie's minders had to laugh and we did get on the news that night.

With Tom we don't have to use that tactic - in fact we like it when he speaks - he will often do our work for us.
For example when we heard about the launch of the controversial red dot logo - we didn't bother turning up as we were confident Mayor Tom Tate could not adequately explain it anyway.
As it turned out he couldn't but claimed later he achieved much attention for the brand. Television news coverage leant towards holding the Gold Coast up for ridicule.

However the Mayor's ability to silence opposition and critics within his own Council is extraordinary and should not be underestimated - the secret meetings, the control over Councillors, the use of funds and budgets as a weapon is incredibly brazen.
Many people appear to be frightened of him. Some have privately mentioned this to us.

One example of the Mayors apparent iron-clad control is the appointements to the Gold Coast Waterways Authority some how many of those appointees rely on Council funding - is this control? Tom himself was appointed - as were other party-politcal appointees with little specialised knowledge in ports, harbours, engineering, wildlife and the environment.

Councillors should be aware that their avenues for gaining community support will be threatened now that Mayor Tom Tate now has greater control over divisional funds. refer Mayor Tom Tate's plans to cull their annual community funds.

But the big difference this time is the sheer extent of the potential "associated developments"
...
The minutes of a special council meeting in October [2012] note that because of previous failed attempts, "it will now be crucial to maximise and maintain market confidence through to financial close".

"To achieve this outcome it will be important to provide consistent and controlled messaging and highlight the key differences of the current process relative to the past," the minutes say.

Hence when many people complained to us that their emails were being blocked by City Council websites; they had been kicked off Mayor Tom Tate's Facebook page; and that some Councillors claimed there had been little response from the community on the issue - we smelt a rat.
The above mentioned council minutes indicated that Councilors were supposed to portray a positive message about the CST and related projects. But it hasn't worked as the survey results have indicated.


The 'controlled message' has failed. The online survey results reported in the GCB  indicated:

"A report on the results, presented to the Gold Coast City Council yesterday, outlined "marked differences" between responses from residents polled online and those questioned in person.
More than 23% per cent of people questioned verbally were likely to support a cruise ship terminal in the future, compared to just 3.5 per cent of people polled online.
[GCB 6-3-2013]
So even the GCCC invitee only selected sampling could only come up with a 23% positive response to the CST.
Check our article Survey called into Question

Our interpretation of these results is that people informed of about the issues do not want a CST and in particular it's associated developments.
Even the GCCC's own secret survey indicated that.
If people are vaguely told unsubstantiated job figures but are not aware of the massive losses to their recreational space they may say 'why not?'.
But those people are not sufficiently motivated to do an online survey - that's not our fault. It's the failed message [a PR firm more than likely].
People who are motivated to voice their opinion genuinely understand the issues they are passionate about it.

Perhaps the purpose of the survey was to promote the idea "we consulted the public widely and they are in support" as indicated in the following council minutes:

"meaningful program of works to assist program acceptance by the community"

Some would suggest this is propaganda to push an unpopular project.

Social Media to the rescue

The Mayor publicly complained about our social media - that in itself will get us a couple of hundred more 'likes' on our Facebook page.

When people feel disenfranchised they turn to avenues of expression - previously this may have meant rallies (they are hard work with the permits, regulations and porta loos required these days).

Now we have Facebook and some of our members are particularly skilled in this arena.
It seems traditional media (editors and journalists) either love or loath Social Media.

The reality is the controlled messaging attempt by the minders of this campaign to acquire public open space has failed - sure they get pretty good front page coverage at times but the long term political face of this city is changing and they have failed to get your message accepted.
We anticipate this will cost someone their bonus. The public are fed up with the lies and deception and will not be silenced - after all we have a lot to lose.

Typical of the lies and deception was a recent claim that only 800 attended our rally - please tell that to Jan, Terry and co who were bitten by ants all day on the petition booths and had a line up for the entire rally. Channel 7 television reporters told us  the chopper crew could see many people were forced to turn back.

The 2-3000 who were actually at the ralling includes 100's of boaties and divers in the Seaway and the North End Surf comp held at the Spit.

That is why it gained international and national coverage on every major Australian channel.

Facebook will not suit all of our supporters - so there will always be a need for rallies and events. The Facebook era is very exciting and allows us to connect with our supporters. The rapid climb in our community support as indicated on our Facebook page is going to be interesting to watch as this gets to the pointy end.

So join us on Facebook and have your say.